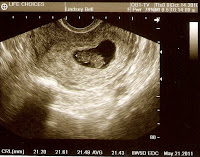 I drove to a local Medical Clinic for my weekly volunteer shift. I had mentioned earlier to one of the nurses there that I was a little nervous about this pregnancy. She thought maybe an ultrasound would calm my fears. I remember thinking as I drove there, "I'm just paranoid. The baby's fine." Turns out I wasn't just being paranoid.

The second our baby came on the ultrasound screen, I knew something was wrong. He* hadn't grown, and I couldn't see a heartbeat. The nurse was wonderful and did a great job hiding her concern as she suggested we do an internal ultrasound. I was supposed to be 12 weeks along (12 weeks and one day to be exact). But he only measured 8 weeks and 6 days. He had stopped growing just a few days after our last doctor appointment. He had been gone for three weeks; I just didn't know it yet.

The next few hours dragged by. Keith met me at at the clinic, and we went together to Dr. Lacey's office. He confirmed what we already knew-our baby was gone. And had been for several weeks.

The surgery on Friday was difficult. At the hospital, they asked me what I wanted to do with the baby's remains. I hadn't prepared myself for that question. How do you answer that? I know my baby is in heaven. I know he's not in that body. But it's still not something I want to think about. Or picture. On Friday, I went into surgery still pregnant, but left with no baby. The bump on my belly remains, but now there's not a baby to fill it.

People are asking how we're doing. I don't really know yet. I feel kind of like a pendulum. At some moments, I'm fine. But then Rylan does something that causes me to think, "I'll never get to see the baby do that" and the tears begin. Or I see another baby. Or read a message from a friend. It feels like I can cry at any moment. But I guess that's good. It'll help me heal.

Keith and I have both had songs stuck in our heads. Keith's is "Blessed Be Your Name." And mine is "Praise You in the Storm." The songs are different, but the message the same: Life will be good at times and hard at other times. Either way, we will worship. I wrote in my journal yesterday morning that Satan will not win. He put Jesus on a cross and thought he won. He was wrong then, and he's wrong now. This will not defeat us. We will still worship. Through tears, probably, but we will still worship. He will NOT win.

Email ThisBlogThis!Share to TwitterShare to FacebookShare to Pinterest
Labels: Miscarriage

Review books for free at Booksneeze